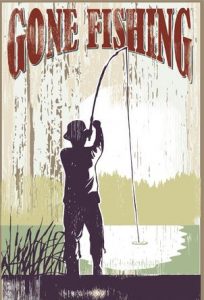 Fishing has become one of the most popular outdoor activities in the U.S. over the course of time. As of right now, there are almost 50 million Americans who go fishing on an annual basis, and that number seems to continue to climb year after year. As a result, the fishing rods that are used have become more advanced than ever as fishermen try to get every competitive advantage they can when they hit the water. But fishing is something that has actually been around for centuries now, and the fishing pole itself has evolved quite a bit since it first came into existence.

The Invention of the Fishing Rod

So, who invented the very first fishing rod? It’s actually impossible to say! Based on stone inscriptions that date as far back as 2000 B.C, there were many people in ancient Egypt and China using fishing rods. Those in ancient Greece and Rome used them as well. It seems those who lived in prehistoric times caught fish by using their bare hands in shallow water. But over time, people realized how inefficient it was to go after fish like that, and they also wanted to d a way to fish in deeper waters. So they started using a hook and line to do it before eventually tying the line to a long rod and using that to help them fish.

Since then, fishing rods have come a long way. While the earliest versions of fishing poles featured the line tied to a single point on the rods, running rings leading from the bottom of the rod to the top eventually replaced the early models. Then, people started making rods out of different materials like bamboo to improve the flexibility of them. But it wasn’t until the 20th century when manufacturing made it possible to employ materials like fiberglass and graphite to build fishing rods. These are some of the same materials used to make fishing rods today.

If you’re in the market for the most sophisticated and responsive fishing rods available right now, Signature Fishing Rods has plenty for you to choose from. Call us at 630-530-8775 to order one of the many rods we have in stock.